An American Populace Tricked Into Warfare

During the outbreak and initial years of World War 1, then called the Great War, The U.S. Congress wouldn't approve war against Germany as F.D.R. and Great Britain desired. American boys just ended their fighting in WWI Europe a mere twenty-years prior and most has no idea why they were sent their to fight in the first place. Well, most believed the media's campaign which went from being somewhat sympathetic to the German cause to charging the German soldiers with barbarism and child slaughter for fun overnight! The truth was, not only did the World Jewish Organization and International Zionist Congress desire British soldiers and supplies to be diverted to Palestine for the conquering of that land for the Jewish race, but France and Britain announced their readiness to admit total defeat and submit to Germany's demands - which were unbelievably, none. That's correct, Germany who offered to end the war for the first time in history as victors without demands (both sides pack-up and go home) was later forced into signing the Treaty of Versailles the world's most one-sided peace terms which brought devastation and famine to Germany on such a severe level that hundreds-of-thousands of German men and women would commit suicide during the 1920's.

From the Great War to the World War...

Charles Repington was a writer for The Morning Post in England. In the years of 1920 he published a book with the title of The First World War. Though it's believed neither influenced each-others usage of worlds and titles,  D. H. Lawrence reportedly stated while attending a social gathering on Armistice Night, "The war isn't over. The hate and evil is greater now than ever. Very soon war will break out again and overwhelm you"  the Germans will soon rise again."

The term Great War commenced to subside in the as early as the late 1920's yet the newer title of World War became more accepted in the later 1930's (as another large war looking inevitable) and by 1940 was common. Winston Churchill further implored the title World War when he spoke on the matter of the Seven Years War.

The establishment of the Federal Reserve (Privatizing of U.S. National Bank) in 1913 kicked-off the First World War less than 1 yr. later. Though Great Britain has been instigating warfare against Germany since the 1880's; particularly, since 1887 when the  World Zionist Congress was established by Theodor Herzl as the new supreme head of the Zionist Organization.

The larger, more influential, nations of Europe were simply too far in debt to the Rothschild family for justifying large-scale warfare with other powerful nations. Hereafter, the privatization of the United States National Bank brought-about another huge source of funding upon the world scene. Warfare on a size never previously imagined would soon commence. 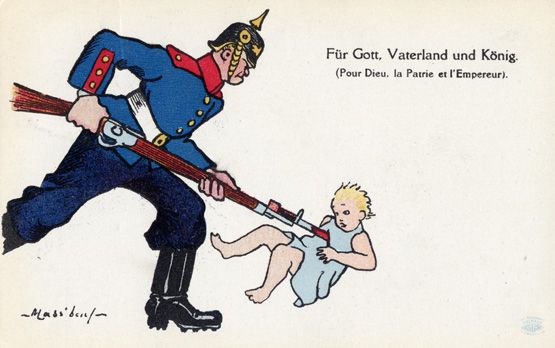 In 1913 and early 1914 America, support for Germany was at an all-time high. Many U.S. citizens were still first and second generation Germans. As World War 1 progressed through 1915 and 1916 Germany was not only winning the war in Europe but enjoying strong support from a strong percentage of the American public. Nonetheless, when the World Jewish Organization and the World Zionist Congress sought to gain control over lands in Palestine, everything would change in America. An Israeli man once said, "young American boys had no idea the true reason why they were going to war."

In order to allow British soldiers to be deported off the Western Front, soldier from the United States were required to replace them. Henceforth, public opinion of the war within the States must change. Jewish powers in the media would simply begin a bogus campaign against the Germans. While looking back into the past and analyzing the situation, it seems utterly ridiculous the American populace would be fooled by such absurd and blatant lies; of 'course, similar situations in the present-day occur all the time.

Out of nowhere, American newspapers and other media sources would be over-flowing with ridiculous advertisements depicting German soldiers killing, and even eating, babies. Tales of the German Hun, a word for barbarian, traveling through Belgium and the other Low Countries into France were falsely laced with these outstanding atrocities. Instantly, inside American public opinion changed concerning the German nation and her military campaign. 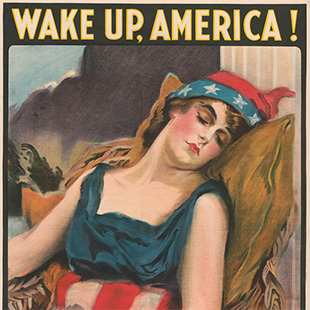 ....Civilians Be Scared! Here come the Hun; a slang word referring to the German's as barbarians.

American were lied to by their own government. The Lusitania was far from a passenger cruize ship. The German government actually posted ads in American newspapers warning the American people of the deception of the Lusitainia.  W. Churchill's famous for setting-up the Lusitania by calling off Juno its British escort ship as the Lusitania closed-in on British waters. Escort ships were the norm and the Juno was already assigned to protect the Lusitania. The Lusitania was transporting civilian passengers decking on the upper-floor unknowingly above war supplies and cruising through an active war zone. This attacked was staged as a deliberate German attack on a civilian ship.

These ridiculous pictures to the left depict babies hanging from hooks & being bayoneted!

This scene on the left isn't a real scene! It's simply created but many people fail

to apprehend this truth. This scene claims that any avg. British woman has more compassion and decency than Christian Nuns which abide within Germany!

How many absolute morons fell for this deception? The answer is many but they didn't realize it was the Jewish community creating the media. They simply assumed nobody within their primarily Christian society could act on this level of dishonesty and immorality; against their own people.

The Hidden Truth's of the World Wars not Taught by Mainstream American Sources. All Agreed Moral Behaviors of Warfare & International Laws Were Broken by the USA & Great Britain.

Nevertheless, American soldiers proved themselves the most formidable yet humble force in the history of warfare. Salute to our brave soldiers who fight for our freedom and have well-earned our utmost respect.

Propaganda Drawings alike these above and to the left, plus seen more seen below, absolutely make me sick just knowing any human-being on earth can portray such anti-Christian values as these pictures are not only untruthful but depict a morbid ostentation only produced by a certain type of person.  - Shaun Prario

This Page Remains Viewable While Still Under Construction